As a member of a couple of angel investor networks, a former software executive, and a teacher of a graduate course on new product/service creation, I have seen many financial projections from startup founders or even new product managers in large companies. 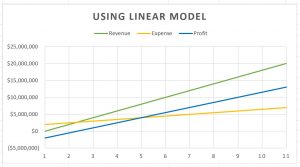 One very common pattern for sales projections is a straight rising line (simple linear trend). Here’s one that shows consistent growth in sales, with expenses following along in a similar path. Breakeven occurs around the fourth time period — perhaps that’s the second half of the second year. 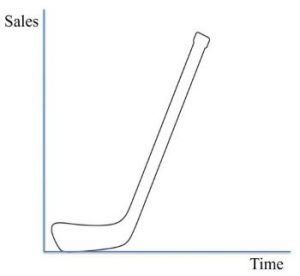 More optimistic projections take the hockey stick approach. The folks with hockey stick graphs always show the long arm of the stick going up — this product is just going to take off and sales will go through the ceiling! 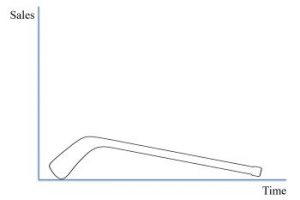 More often than these hopeful folks realize, the hockey stick goes the other way.

The underlying theory of sales growth in these charts is unclear — if there is even some kind of well-thought out model underlying them. Often there isn’t one and the creators of these projections are just playing with arithmetic.

An improvement over the simplistic linear or wishful hockey stick “model” is the four-stage product life cycle — launch, growth, maturity, decline. With that in mind, you might get to see sales projections that follow this pattern. 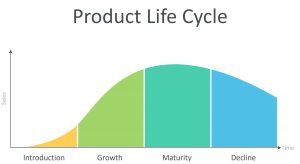 It’s a more nuanced, maybe even reasonable, basis for estimations in spreadsheets. But aside from launch, these phases are not easy to identify in real-time. Moreover, these phases are so general as to be generally useless in practice. And that is because this kind of curve has not been tied into what is known about patterns of adoption of new products or services, especially technology products.

There are better ways of thinking about sales projections for new products from startups or established companies. These better approaches are not original with me nor are they new, although they do not seem to have the popularity that you would expect. 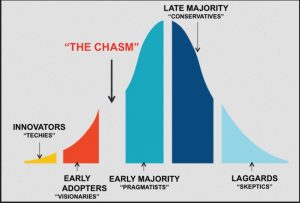 Here then is a picture of the general pattern of adoption of technology products — what has long been called the diffusion of innovation or, with the notch between the second and third groups, the chasm that new products need to get across in order to be successful at scale.

While the speed of adoption and the actual distribution of various groups is not always a nice normal distribution, it provides a useful framework to identify when different kinds of people will adopt the new product or service. (This isn’t the place to go into the details about the characteristics of each of the five groups. More about that can be found in such classic books as Diffusion of Innovations by Everett M. Rogers and Crossing the Chasm: Marketing and Selling Disruptive Products to Mainstream Customers by Geoffrey A. Moore.)

There has been a lot written on this S-curve, but curiously very little of it ties the S-curve to the financial demands of a startup or a new product launch in an established company. While many people seem to have a basic understanding of the S-curve for the adoption of new products/services, they don’t link that to the money they need. But the pattern of adoption has direct financial consequences.

What do these financial consequences look like? Consider this picture. 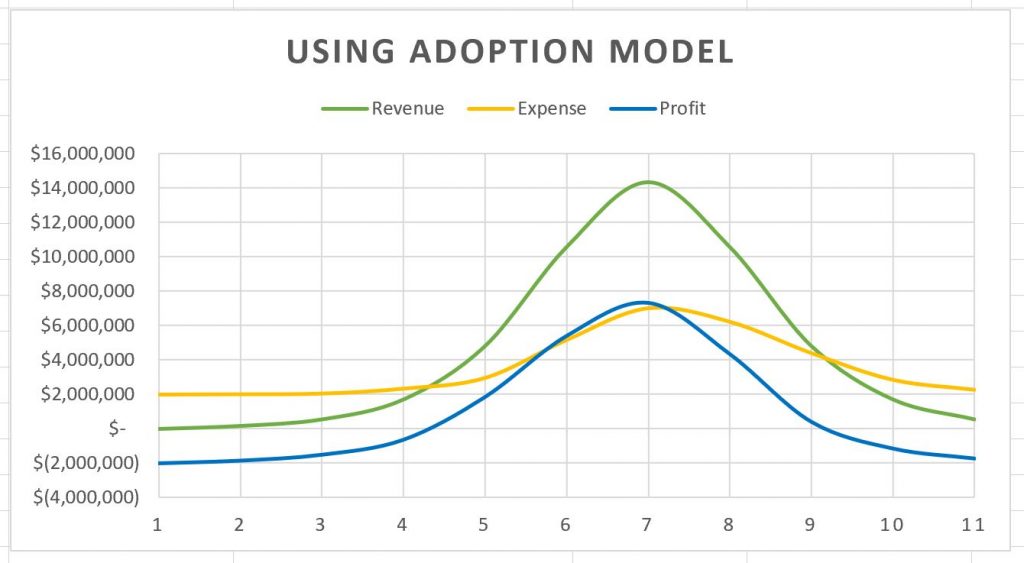 The model can be more granular, but this simple model illustrates the point. The expenses match the various stages of the adoption cycle, including the marketing costs of getting past the chasm. The model also reflects the fact that later adopters usually require more support in their use of products and even greater attention to an easy user interface than at the start. The model also reflects the need to create the product before there is any paying customer at all.

The technology adoption cycle provides the framework, but the actual pattern for a new product can be updated with real-time data that reflects how fast adoption is moving and into which groups.

With this kind of model in hand, the product planner can estimate the pattern of product adoption in the future. In turn, that enables better financial planning to estimate future profits.

It’s worth also saying that in startups, in particular, cash is king. No matter what your profits might be on paper, if there isn’t enough money to pay for essentials — say the salaries of key employees who are writing your software — then your startup is in deep trouble. In startups, misjudgments about the money coming into the business versus the money going out of it can be fatal. So startups are especially vulnerable to inaccurate sales projections.

Whether it’s a new product in a big company or a startup, even a sales projection (and updates) based on an understanding of the adoption of innovations does not necessarily guarantee a big success. But at the least this kind of smart sales projection will help avoid a nasty surprise that leads to a cash crunch.

If you have a new product or service in mind, you know that you need to find a way to differentiate it from the alternatives that people are already using or could use.  But then maybe you have a hard time coming up with ways to make what you are offering really different and new.

This is a basically a challenge to your creativity. And many of us think we need to twist our brains to come up with good creative ideas, which is hard work we don’t feel we can do.

Although we have come to frequently expect new technology products, the challenge of creativity is especially hard for technologists.  They have lived in a world that demands no software bugs, no downtime and the like.  They are by training (as the A students many were in school) and maybe by nature perfectionists.

A perfectionist mindset undermines the kind of experimental approach and its possibility of failure which is necessary for innovation.  For that reason, creativity can seem to be an insurmountable, impossible challenge – to be both perfect and creative is a low probability occurrence. 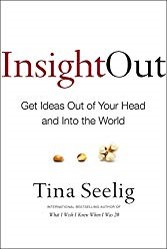 Coming up with new ideas shouldn’t be such a challenge.  Consider just two of many authors.  Tina Seelig, Professor of Practice at Stanford, has written and spoken about creativity and innovation.  The titles of two of her books offer a quick summary of her themes — “InsightOut” Get Ideas Out Of Your Head and Into the World” and “inGenius: A Crash Course on Creativity” . 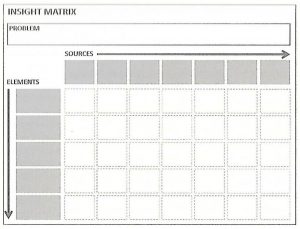 William Duggan of Columbia Business School has also written “Creative Strategy: A Handbook for Innovation” in which he champions the innovation matrix as a means of generating new ways of looking at the world. You break down what you’re trying to do into its parts and then search for any company that provides a model of how to do that part well. It’s a tool for what’s called recombinant innovation. 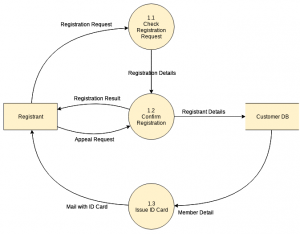 In addition to books on creativity, however, consider a methodology for analysis and software design from more than forty years ago that was named after its originators – Yourdon and DeMarco.  If it is remembered at all, it is for data flow diagrams.

That’s not what I want to emphasize here. Nor do I plan to lead an effort to revive the popularity of Yourdon-DeMarco structured analysis/design and the classic waterfall development lifecycle that it aimed to improve.  Nor am I advocating for the underlying idea that there could be a complete and correct design up front in that lifecycle.

Yourdon and DeMarco had even more important guidance for software designers, although that seems to have been lost in the history of software design.

That guidance:  think more conceptually, more abstractly.  They distinguished between the logical level (the “what”) and the physical level (the “how”).   At the physical level, you would describe the implementation.  At the logical level, traditionally, you would describe essentially what the organization is trying to do.  When thinking about a problem, separate out its implementation (how you see it operate) from its intention.

When it comes time to re-design a system or designing a new product, you first rearrange what is happening at the logical level.  Only after that makes sense to everyone do you worry about how it will be implemented.

By the way, this is not something that requires an excessive amount of writing upfront.  Instead, it is often better to explain this to someone else verbally.  Because you are trying to communicate clearly and concisely in conversation rather than impress someone with a document.

Look at what is happening and describe it in simple words, before you use a fancy name for it that you might have been taught.  Often the solution to a problem is obvious if you listen to yourself carefully.  (Maybe recording it helps.)  That’s what you should start with.

Thinking this way makes things clear and clarity yields insight. Sometimes the solution can be blindingly simple once you look at things conceptually. The ancient story of Alexander the Great and the Gordon knot is a good example. The knot only had to be broken. Instead of meticulously searching where to pull on it so it would unravel, he just cut it.

One often cited example of the reverse approach and of missed opportunities that result is in the transportation industry.  When airplanes and airlines first appeared, there was an opportunity for the railroads to invest and own the new industry.  Instead of thinking of themselves as the movers of people and goods over long distances (the higher conceptual level), they thought of themselves as the operators of railroads (the lower physical level).  As they say, the rest is history. 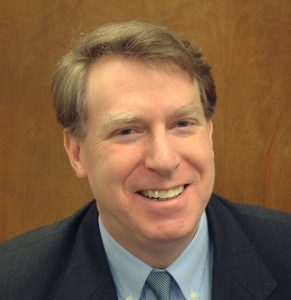